Shounen titles are often entertaining. Aside from the overarching narrative that keeps them dynamic, many of these series have a good style of animation and decent characterization, and who doesn’t want all-in-one goodness in a single show? To rate these series however, I would not define them as total masterpiece unless they give a vital impact to my daily life. Behind the breathtaking action-packed scenes, the humor of the characters and the notable storytelling, you wouldn’t realize that many popular series uplift your heart and keep you motivated to surpass through the barriers you meet along your way.

Have you ever wondered why Fullmetal Alchemist became a big hit? If you are a big fan of the series, then your answer may not be wrong. If you didn’t have the chance to watch Elric Btothers’ journey to regain their bodies back to the normal state, it is time for you to figure out why such shounen series touches the heart of many viewers out there. While I consider it as a not-so-overrated anime unlike Naruto, One Piece and Attack on Titan as they always go viral worldwide, other types of viewers might call Fullmetal Alchemist a retarded anime. Don’t get me wrong because I don’t hate those haters, they have their views as well. Some of you might think the animation of the series isn’t outstanding because for instance, people tend to be visually oriented at first before digging into something deeper. But hey, I know a lot of you like the charismatic Roy Mustang, and you were once entertained of Ed’s height problem. It’s not enough to fall in love with those simple things because Fullmetal Alchemist is one of the best series that motivates every fan towards the brighter side of life.

So, here are 5 valuable life lessons you can get from the series:

Humankind cannot gain anything without first giving something in return. To obtain, something of equal value must be lost. The law of equivalent exchange is already an overworked concept you have always encountered when it comes to Fullmetal Alchemist. By the meaning of the law itself, you don’t need to understand the whole thing in your chemistry or physics class, you don’t need to go over your old notes to read about the composition and structure of energy and matter and how these small things behave in nature because that’s too stressful. All you need is a basic understanding on the impact of the principle to human lives. For fans of the series, you are much aware, more than anyone in the universe, the philosophy is rather a dangerous act if perform selfishly as failure to pursue the philosophical law might result to devastating consequences.

If you scrutinize deeply the concept, it brings an eye opener to the real world where such philosophy can be applicable in everyday life. It teaches the reality of life in simple ways. How can you achieve success if you don’t have hardwork and perseverance? In the brighter angle of life, it’s like sacrificing your time and effort in order for you to get what you want, at least, happiness and contentment at the end of the day. Figure out whether it’s worth the sacrifice. In your workplace, you might be physically exhausted. In school, you might be mentally tired, but the effort you rendered is the most valued action that requires sacrifice. Contrary to the law, however, failure to achieve something is the result of inability to determine the fundamentals of life as making a selfish decision and the greed to surpass the top line. Would that gain the value of satisfaction? Let’s take the word “love” for instance. You would sacrifice everything for your family and loved ones as utilizing your time, money and effort. Would you want something of equal value from them in return? To simply put it, it is more blessed to give than to receive. If you have a good mindset towards something you really want to possess then countless rewards of big values are always on your way. It’s not always a material thing in return, but a simple feeling of happiness.

You fans already know how everything started – how Ed lost his right arm and left leg, and how Al became a fullmetal being. You know the taboo. You can simply define them as sinful, but you can’t blame them for what they did either. When it comes to human transmutation, the law of equivalent exchange is exemption. As what I was trying to say in the aforementioned, the law of equivalent exchange doesn’t always give positive consequences. You can’t bring back life once it falls into ashes. It was painful, but the Elric brothers didn’t regret no matter how much they lost. In fact, it is what makes them stronger to move from the darkest footprints they left behind.

In life, loss is a normal stage people experience with either grief or anger.  They feel an intense anger because denial is still there and they experience grief because they can’t accept it. However, the end stage is still acceptance where people need to overcome the pain and keep moving forward. Edward Elric is a good example of character in the world of anime who emphasizes the importance of moving forward despite the pain he experienced from the past.

The “Don’t Forget 3 Oct 11” inscribed on Ed’s pocket watch in Fullmetal Alchemist: Brotherhood marks the day when they burned down their childhood home which signified their determination to go on with their journey without turning back.

Family is also a central theme in the entire story as evidenced by the the tight bonding of the Elric brothers which I truly appreciate throughout the series. Edward Elric isn’t just your easygoing and short-tempered brat you might think of as what he looks physically and mentally. He protects Al and does everything to bring his body back to normal. His entire life revolves around with Al to search for the truth on how to return their real being. They might have varying ideals and personalities, they argue over simple matters, but their relationship becomes stronger as they learn to accept one another. Nothing could ever beat their brotherly love. Apart from that, in terms of Ed’s relationship to his father, Van Hohenheim, the series depicts the importance of giving honor to your father. Despite the pain from the past, the anger and the hatred he strongly held towards his father who was estranged from them for many years, Ed gradually learns to trust his father and acknowledge his presence. Giving honor to your parents means giving value and respect to them through action, thoughts and words.

Scar is one of the most prominent characters in the series who deeply holds retaliation over his destroyed homeland. He is consumed by hatred and lives with anger towards the state alchemy. As the series goes, he learns that revenge is not the answer to all his furies to those people who completely destroyed his land and its humanity. In the neutral way, Scar’s story shows a good life lesson which stresses the greater impact of revenge to oneself.

The more you seek out vengeance, the more you hurt yourself. Just because someone inflicts pain onto you doesn’t mean you do the same thing, or with greater exertion, towards that person. Is it really worth? No. It adds nothing but more pain which makes the wound fresh instead it undergoes the healing process. Don’t let the world watch you suffering from such pain. The only way to seek revenge is acceptance and move on.

The strong need to be a perfect human being is the ultimate goal of the main antagonist in the series, named as Father. As a result, he intends to discard his deadly sins in the form of homunculi – Lust, Gluttony, Envy, Greed, Sloth, Wrath and Pride. But does being perfect make him human? For Van Hohenheim, one must know what it means to be human, and that is, your flaws and weaknesses which allow you to stand up and become a better individual. To simply put it, imperfection makes you perfect, and being imperfect means being human. 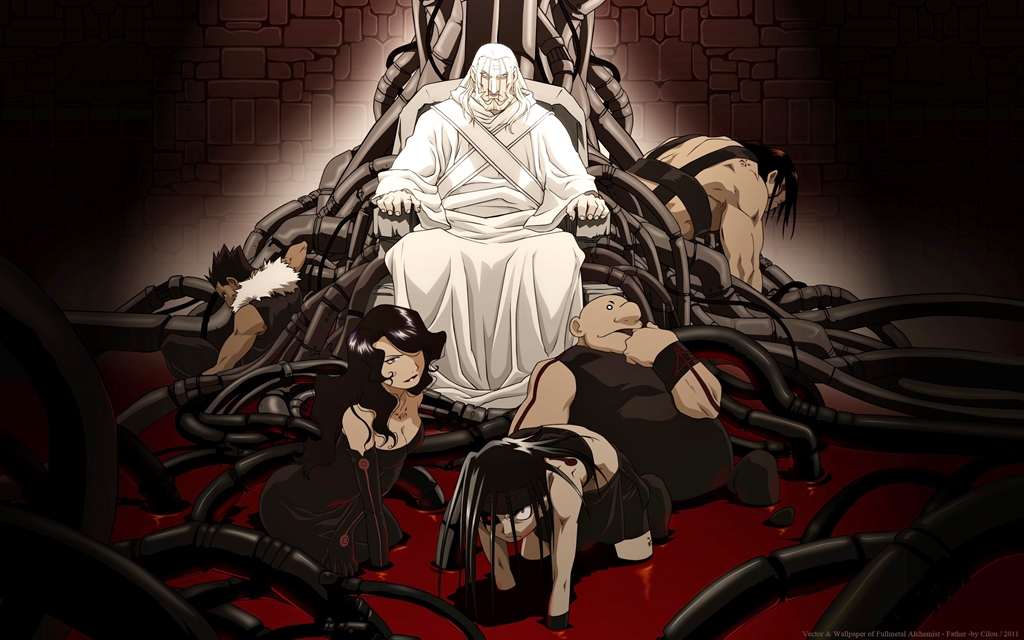 “A lesson without pain is meaningless. That’s because no one can gain without sacrificing something. But by enduring that pain and overcoming it, he shall obtain a powerful, unmatched heart. A fullmetal heart.” – Edward Elric, Fullmetal Alchemist: Brotherhood

All images belong to their rightful owners and are used for illustrative purposes only. I do not own any of them unless stated otherwise.
Follow Kurumi Shim's Blog on WordPress.com
%d bloggers like this: